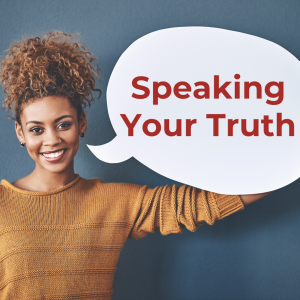 Yesterday, we had my Speaking Your Truth workshop, which was the 4th in a series.

The first question I asked was “Why is speaking your truth important?” The answer came back loud and clear that if you don’t speak your truth, your life will be out of balance. This will only lead to problems, and even illness.

In the interests of speaking my truth let me tell you about the week I’ve had. On Monday, I coached a very dynamic young lady, who was an inspiration to me! It is truly a joy when I meet someone who is doing so well in life at such a young age. My old self might have felt a tinge of envy since I was held back by old fashioned ideas of women not working. But now I feel so happy for younger women’s success. Maybe it’s my age, but everyone seems so young these days!

The next day, Tuesday, I was interviewed on Radio Cayman about coaching. It was about a half an hour interview, which was amazing! Then the guest after me was late arriving, so I got the chance to coach the presenter live on air! What a cool opportunity! Never have I been so grateful for traffic!

On Wednesday, a funny thing happened. I hosted a Group Coaching for trainee attorneys. I had only invited a very small group as this was a pilot program. We had discussed the topics in advance, and they had agreed to the subjects I had suggested. Almost as soon as we started, it became apparent that they had no need for that workshop! At the end, I went through the other topics, asking if they would benefit from them, and they replied they were doing really well in those areas as well. I was super impressed with how well they had balanced their lives, considering the pressures of their profession.

In the past I would have probably drowned in shame and humiliation! Because I think I would have seen this as a complete failure. But thankfully, the participants were really lovely, polite and kind. They said the workshop would have been helpful to them when they started their “Articles” or traineeship. And since this pilot was designed as a research project, it was useful for me to find out the situation in advance of promoting the program.

On Thursday I had a slight fever so I slowed down. I had a lovely walk in the park with my son, and I took some time to do some dancing. I tried a new piece on the piano, which I discovered was not that hard. It was a Mazurka by Chopin. At the moment I am only playing Chopin!!  I think this must be something like artists going through a “blue” period!

Friday is the day of my regular Group Coaching. As I mentioned above, this was the 4th session and it was on Speaking Your Truth. We had previously covered Self Love, Setting Strong Boundaries and Boosting Your Confidence. But this is the one that was the most challenging for me. Because I still have some work to do in this area. It was powerful! I had my own breakthrough right there on the call. And of course the participants were having their own Aha! moments.  And when I see that happening, it is what makes it all worthwhile. 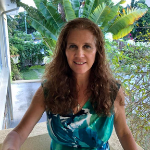